Creative Discovery on the Maker Trail in Enid You’ve heard of makerspaces, but what about a whole Maker Trail? This fall, as part of the Edward Jones Placemaking on Main Challenge, Main Street Enid created just that—a downtown-wide, multi-station event with creative, experiential activities. Kelly Tompkins of Main Street Enid shares more about the Maker Trail project and how it inspired creativity and helped people discover downtown.

Learning through discovery gives us the problem-solving experience necessary to be creative and innovative thinkers. The maker movement, including makerspaces and Maker Faires, involves independent inventors, designers, artisans and tinkerers creating and sharing.

Inspired by the maker concept, Main Street Enid created a Maker Trail with opportunities to explore, create, and discover at various “maker stations” around downtown Enid at our First Friday and Oktoberfest event in October 2017. A “trail” of maker activities called back to the historic Chisholm Trail (aka “world’s greatest cattle trail”) that went through downtown Enid 150 years ago, and created the opportunity to lead attendees off the beaten path of the main square to shopping, dining, and arts and entertainment locations many hadn’t noticed before.

Along the Maker Trail, attendees got to create with masking tape, build with cardboard, connect a circuit, watch a giant geodesic dome being built, visit Enid’s own makerspace, disassemble a piano, make and race potato cars, code a mini robot, and build a structure with straws:

Art Station
The Art Station was located in the Leonardo’s Children’s Museum parking lot, with Adventure Quest open that evening, which is the world’s largest community-built playground. It is also near Creative Arts Enid and our new Bright Future community-painted mural. The activity was a technique called Tapigami, which is building things out of masking tape. Volunteers were from Creative Arts Enid, Leonardo’s and the community. Some people really connected with the idea of creating with tape and had fun making things like glasses and hands.

Cardboard Build Station
The Cardboard Build Station stemmed from our recent giant hammer project, where we built a giant hammer out of carpet tubes and cardboard boxes. The construction instructor from Autry Technology Center ran this station at the Butterfly Project mural, next to the Downtown Kitchen Store, Cafe Garcia and David Allen Memorial Ballpark. Cardboard and tape provide so many possibilities, we look forward to building more giant things!

Circuit Station
The Circuit Station was in the Central National Bank Center plaza, an event center, where attendees also enjoyed live music. The unexpected fun of learning about the flow of electric current and lighting LEDs leads us to other ideas on a larger scale for the future, possibly with conductive paint, lights and sounds. 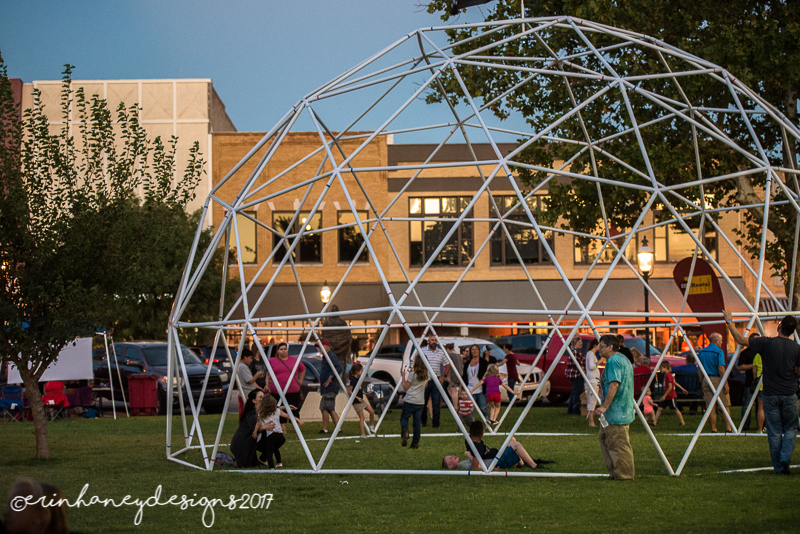 Geodesic Dome
The 33-foot diameter Geodesic Dome was built during the event on the Courthouse Lawn. This was fascinating to watch, and around 20 bystanders helped lift the last section when it was near completion. After the dome was built, children seemed compelled to run in circles under it, and it became a magical gathering place.

Several other artists and makers also set up on the Courthouse Lawn to demonstrate activities such as woodturning, cosmetology and 3-D printing.

Library Makerspace
The Enid Public Library Makerspace has an abundance of supplies and electronics for learning and creating. They gained new attention by being open during the Maker Trail and more people now realize what a great resource it is. 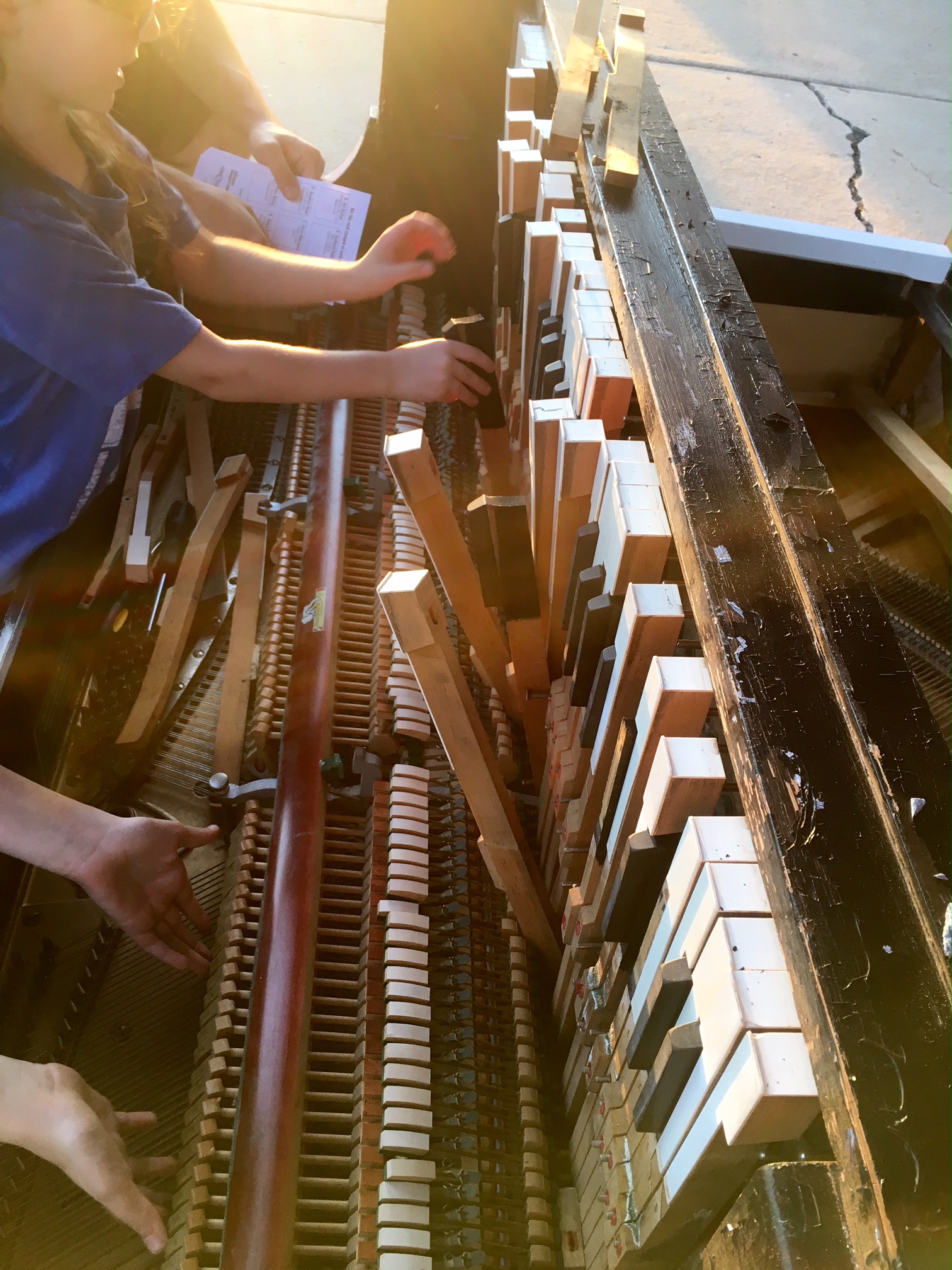 Disassembling the piano to see how it works was fascinating. Photo by Kelly Tompkins

Music Station
The Music Station in front of Community Thrift & Gift consisted of a piano to disassemble. Part of learning is tinkering and seeing how things work by taking them apart. Families in particular enjoyed this station and were encouraged to take home (surprisingly long) piano keys to make other things out of them. 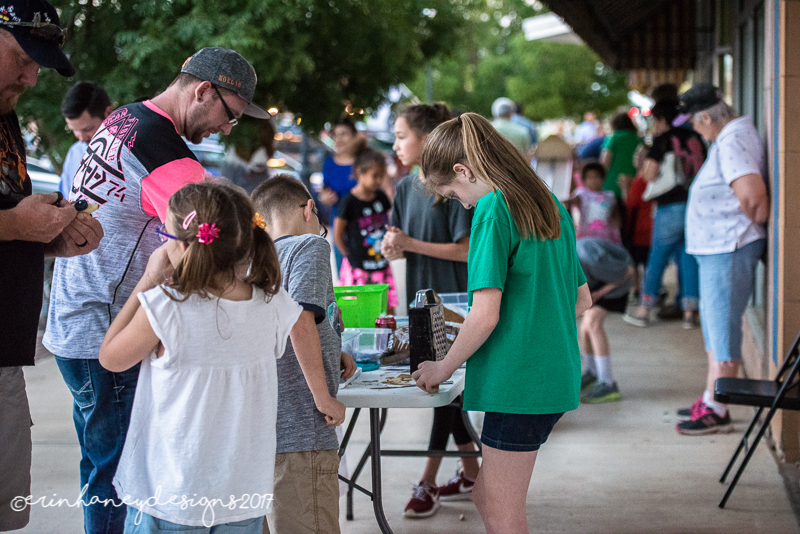 It was fun carving potatoes into cars to race down the track. Photo by Erin Haney Designs

Robot Coding Station
The Robot Coding Station in front of the Broadway Antiques & Uniques antique mall featured four Ozobots that followed black lines and codes. It is surprisingly fun to draw a line and instructions in the form of color codes and watch a little robot follow them. 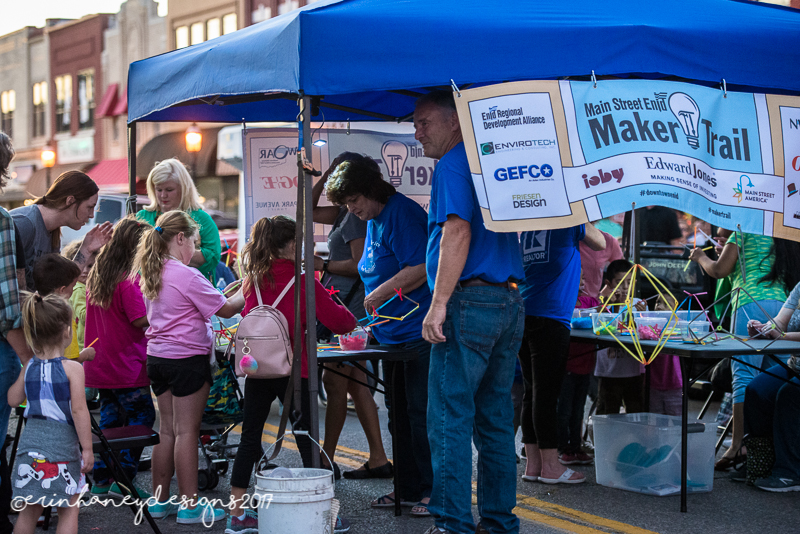 Many people of all ages loved building with straws and connectors. Photo by Erin Haney Designs

The Maker Trail project was a huge hit. It was marketed extensively, which resulted in the most-attended First Friday we’ve ever had, with activities and people ALL over downtown.

Feedback on the Maker Trail was also positive—the worst we heard was that attendees could not make it to all of the stations because there was so much to do! (The stations spanned an area three blocks by five blocks—in the future a shorter distance would not only be easier to manage, it would also be easier for attendees to visit each station.)

Our volunteers also had a great time. A robot station volunteer loved to see the moment when people realized they were actually coding a robot, the beginning of so much in the technology industry. The circuit station volunteers were surprised at how fun people thought the activity was, and a jet mechanic Marine recruiter loved the idea of learning by disassembling the piano.

Within days after the Maker Trail, Main Street Enid heard from teachers who wanted to use the activities with their elementary and middle school science students. This and all of the positive feedback made us realize this is something people are excited about; we are exploring possibilities for the future of the maker movement in their community.

The Maker Trail project allowed Main Street Enid to start relationships with new partners and volunteer groups they hadn’t connected with in the past. Funds for the Maker Trail came from 31 individuals who donated $10-150, and eight corporate sponsors who contributed $250-$500, in addition to the $2,500 matching grant from Edward Jones, with assistance from crowdfunding expert ioby and Main Street America.

Like learning about this Edward Jones Placemaking on Main Challenge project? Read about another in Transforming a Neglected Parking Lot in Metuchen, New Jersey.

About the author:
Kelly Tompkins has been the Director of Main Street Enid since 2012. She is a CNU-Accredited creative placemaking urbanist who was chosen as Oklahoma Program Manager of the Year in 2015. Kelly thrives on marketing and incorporating the arts into downtown revitalization.